A man who broke into the Dallas Museum of Art on Wednesday night caused significant damage, destroying property including three ancient Greek objects and a contemporary Native American piece before he was arrested, Dallas police said. Brian Hernandez, 21, approached the museum’s glass entrance doors with a metal chair at […]

A man who broke into the Dallas Museum of Art on Wednesday night caused significant damage, destroying property including three ancient Greek objects and a contemporary Native American piece before he was arrested, Dallas police said.

Brian Hernandez, 21, approached the museum’s glass entrance doors with a metal chair at about 9:40 p.m. and began destroying objects once inside, police said.

Hernandez broke into a glass display case and shattered a 6th-century B.C. Greek amphora — a type of ceramic vase — and a Greek box from 450 B.C. The pieces together were valued at approximately $5 million, police said, based on information from the DMA’s security and operations director, Kenneth Bennett.

But later Thursday, museum director Agustín Arteaga said in a statement that the DMA is working with insurers and that “we anticipate the real total could be a fraction of the original $5 million estimate.”

Hernandez is also accused of destroying a 550–530 B.C. bowl that was valued at $100,000. Police said he also broke into a display case, picked up a ceramic Caddo effigy bottle depicting an alligator gar and slammed it to the ground, shattering it. The piece was valued at $10,000.

“Three ceramic Greek vessels were seriously damaged in addition to one Native American contemporary ceramic piece,” Arteaga said in the statement. “In addition, less than a dozen smaller pieces that were in the same glass case attacked, might have suffered minor damages.”

The museum was open to the public Thursday, including its “Cartier and Islamic Art” exhibition. Some permanent collection galleries were closed for the ongoing investigation.

The shattered objects are among more than 24,000 works in the DMA’s cross-cultural collection, which spans 5,000 years. They’re hardly the costliest items the museum has housed. For eight months in 2012, a painting by Leonardo da Vinci now considered the world’s most valuable artwork reclined on an easel in a storeroom in the building. It sold at auction to the Saudi crown prince for a record $450.3 million in 2017.

Hernandez was read his rights and confessed to officers, police said. He was charged with criminal mischief of more than or equal to $300,000. Bail was set at $100,000.

The museum noted that Hernandez acted alone and unarmed, adding that his purpose was not to steal any artwork.

A DMA security guard found Hernandez on the museum’s concourse after a motion sensor went off and apprehended him before calling police. Police said Hernandez also called 911 on himself from inside the museum. Police responded at about 10:10 p.m.

Hernandez is being held in the Dallas County Jail, Dallas police said Thursday.

The guard told police that Hernandez said “he got mad at his girl so he broke in and started destroying property,” police said.

Police said Bennett, the DMA security and operations director, showed them video of the suspect damaging and destroying museum property. In addition to the artwork, Hernandez is accused of causing tens of thousands of dollars in damage to other property including display cases, furniture, a computer and phones.

“While we are devastated by this incident, we are grateful that no one was harmed. The safety of our staff and visitors, along with the care and protection of the art in our stewardship, are our utmost priorities,” the museum said. 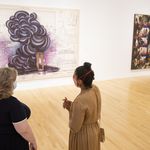 DMA board member Mary McDermott Cook, whose late parents donated or made available to the museum thousands of pieces of art, got a first-hand account of the vandalism on Thursday morning from museum director Agustín Arteaga. The call “made me sick to my stomach,” Cook said.

“I feel like everything has gone nuts, and this is one thing that went nuts,” she said. “But what I also said is, ‘Let’s face it. It’s just things. No person was hurt. And we have the technology and the expertise to put broken things back together.’ And thank God for that.”

Sun Jun 5 , 2022
The Centers for Disease Control and Prevention on Friday warned that monkeypox could be spreading from person to person in the U.S. Some of the monkeypox cases in the U.S. have not been linked to recent travel to countries where the virus typically spreads, suggesting instead that the virus is […]