Just like the books we love to read that teleport us from reality to whatever faraway place in the plot, there are some films we just can’t get enough of that fuel our “wanderlusting” spirit. We’ve come up with a list of dreamy movies that’ll have you planning your next […]

Just like the books we love to read that teleport us from reality to whatever faraway place in the plot, there are some films we just can’t get enough of that fuel our “wanderlusting” spirit. We’ve come up with a list of dreamy movies that’ll have you planning your next trip seconds after the credits.

Dreamy shots of Italy are mixed with a stomach-turning murder mystery in The Talented Mr. Ripley. When Dickie Greenleaf’s (Jude Law) father pays errant boy, Tom Ripley (Matt Damon), to bring his son back to America from Italy, Dickie and his stunning girlfriend, Marge Sherwood (Gwyneth Paltrow), never expected the dangerous lengths Ripley will go to turn his low-class status into a life of wealth. Aside from its attention-catching storyline, the film was shot in the cliffside beach town of Positano on the Amalfi Coast — making anyone who watches the film enticed by the thought of spending a summer in Italy.

When native New Yorker Rachel Chu (Constance Wu) gladly accompanies long-term boyfriend Nick Young (Henry Golding) at his best friend’s wedding in his native Singapore, Rachel, upon arrival, discovers Nick is one of the wealthiest eligible bachelors in the country. Unpreparedly launched into Singapore’s competitive world of socialites and disapproving mothers, Rachel becomes insecure about herself and where she comes from, which, in turn, provokes her to engage in an internal self-doubt debate on whether staying with Nick is worth it or not. Aside from the enticing family-drama plot, Crazy Rich Asians exhibits Singapore’s many splendors: Marina Bay Sands, Gardens by the Bay, and CHIJMES Hall, are a few filming locations of many.

Three estranged brothers — Francis (Owen Wilson), Peter (Adrien Brody) and Jack (Jason Schwartzman) — decide to reunite one year after their father’s passing for a train journey across India. While Peter and Jack are under the impression that this trip is for bonding after a loss, Francis knows the real reason why they’re together again: to visit their mother in a Himalayan nunnery. Directed by American filmmaker Wes Anderson, the movie was filmed across Rajasthan, from Jodhpur to Udaipur.

When aspiring novelist Gil Pender (Owen Wilson) vacations in Paris with his fiancé Inez (Rachel McAdam), he decides to delve into exploration of the city on his own. His nighttime enthrallment with Paris transports him back to the 1920s, where he hangs out with some of the era’s most-notable public figures and literature icons (think F. Scott Fitzgerald, Ernest Hemingway and Gertrude Stein). Bottom line, this movie will make you want to book a trip to Paris ASAP, with all of its picturesque filming locations within the city, including Claude Monet’s Home, and Shakespeare & Co.

Based on a true story, Cheryl Strayed (Reese Witherspoon) embarks on a self-exploration journey after the loss of her beloved mother Bobbi (Laura Dern) to cancer. With zero outdoor experience, Cheryl sets out to hike the 2,650-mile Pacific Crest Trail: one of the longest and most difficult trails running along the West Coast, from the Mexican border to the Canadian border. With scenes filmed in California’s Mojave Desert and Oregon, we believe this is the West Coast travel wanderlust you need in your life.

With two of the greatest actors of the 20th Century starring as the leads, Roman Holiday is a classic film starring none other than Audrey Hepburn and Gregory Peck. Set in Rome in the 1950s, this was the first American film shot in its entirety in Rome. The love story goes like this: European princess Ann (Audrey Hepburn) and American reporter Joe Bradley (Gregory Peck) begin to have feelings for one another after Joe brings Ann to safety for the evening when he finds her asleep on a random park bench. When Joe finds out about Ann’s noble identity, he plans to try and get an exclusive interview with her; however, love gets in the way. This goes without saying, but Rome always looks pretty, no matter the decade.

One of the 2000s most wanderlust-worthy movies, Lost in Translation teleports you from your screen to the magic of Tokyo, Japan. It follows the unconventional bond of lonely movie star, Bob Harris (Bill Murray), and conflicted newlywed, Charlotte (Scarlett Johansson), after they meet at the Park Hyatt Tokyo’s bar (he is there filming a whiskey commercial, while she is accompanying her celebrity photographer husband). Together, the two explore Tokyo and all its bright lights, which, as you can imagine, has us travel enthusiasts wanting to make the beeline for Japan (the country is reopening to tourists on October 11 — we think it’s time for you to book your flight).

Heartbroken math teacher Frank Tupelo (Johnny Depp) crosses an entrancingly beautiful stranger, Elise (Angelina Jolie), during his trip to Venice, Italy. What at first is a harmless romantic affair soon turns into a dangerous game of “cat and mouse” while several people, who all think that Frank is Elise’s thieving lover, Alexander Pearce, attempt to capture the pair. Among other dreamy spots, the Palazzetto Pisani boutique resort is featured as one of the main locations in the film (fun fact: it can only be reached by boat via the Grand Canal). (All in all, is there any better setting for a Bonnie-and-Clyde-esque love story than that?)

Home Renovations That Are Surprisingly DIY

Wed Sep 28 , 2022
eclipse_illustrations or photos / Getty Photos If you’re scheduling to do some initiatives about the house, you are not alone. According to the 2022 U.S. Houzz & Household Review: Renovation Traits, dwelling renovation exercise and shell out are at their maximum premiums because 2018. Test Out: 22 Aspect Gigs That Can […] 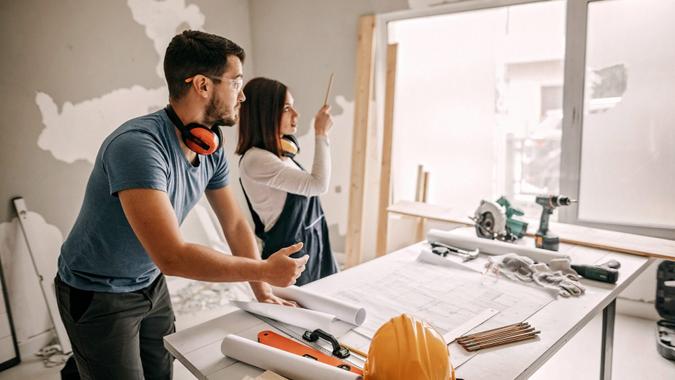