Comment on this story Comment correction An earlier version of this article misstated the date of an ABC special that will salute Norman Lear’s 100th birthday. The special will air Thursday, Sept. 22. This article has been corrected. What is left to ask Norman Lear? The living legend of television […]

An earlier version of this article misstated the date of an ABC special that will salute Norman Lear’s 100th birthday. The special will air Thursday, Sept. 22. This article has been corrected.

What is left to ask Norman Lear?

The living legend of television has spent his life doling out lessons, so when granted the opportunity to converse with him via email ahead of his 100th birthday, what was there to ask?

Does he know the meaning of life? “Yes, the meaning of life can be expressed in one word: tomorrow.” What pieces of advice does he have that stand out above the rest? “There are two little words we don’t pay enough attention to: over and next. When something is over, it is over and we are on to next. Between those words, we live in the moment, make the most of them.” Does he consider a hot dog to be a sandwich? “I consider a hot dog to be a personal delight.”

His birthday is Wednesday. He planned to spend it in Vermont “at what I call our Yiddish Hyannis Port with all my kids and grandkids. At the moment, I feel like I could do a second 100.” ABC will honor Lear on Sept. 22, with what it promises will be a “star-studded” special titled, “Norman Lear: 100 Years of Music and Laughter.”

A second 100 would certainly be welcome. At the very least, as actress Rita Moreno suggests, when asked this week to talk about Lear’s milestone birthday, “I wish there was a way that they could make copies of him. Wouldn’t that be marvelous? … What a super, super addition to the human race he is.”

Or, as his longtime friend Mel Brooks put it, via email: “Norman has so much to give us, I don’t think 100 is nearly enough.”

By all accounts, he is one of the most important figures in modern pop culture — so much so that by now, you probably already know everything you should about Norman Lear.

You probably know of his tremendously prolific spell creating and producing some of the most vital TV sitcoms in the 1970s such as “All in the Family,” “Maude,” “Good Times,” “The Jeffersons,” “One Day at a Time” and “Mary Hartman, Mary Hartman.” And you’re probably familiar with the fact that he and his colleagues received praise for addressing hot-button issues in those shows, including racism and abortion, using humor and the humanity of his characters to expose and explore what he considered the “the foolishness of the human condition.” Not to mention the fact, as Moreno points out, that he would often have the very targets of his criticism “laughing their asses off.”

You’ve no doubt heard of his political activism, which spread far beyond the humanistic messages baked into his shows. In 1981, he founded People for the American Way, a nonprofit that aimed to challenge the agenda of the Moral Majority and that eventually became a political action committee. In 2004, he founded Declare Yourself, a campaign to urge young people to vote. He remains a true believer that the best of the country’s citizens will save it, should it need saving.

“America has never been in more need of its solid, caring citizens,” Lear says. “At 100, we are a long way from the America I believe I was born into. I don’t want to wake up in the morning without hope so I have the faith that enough caring, sensible Americans are fully dedicated to the rights the Constitution guarantees us all and will find their way.”

To summarize Lear’s 100 years is a nearly impossible task, but Rich West, a professor of family communication at Emerson College who has taught a course on Lear’s career, offers a thoughtful framing, calling Lear “an electronic therapist.”

His shows “forced people to confront their own values, their own prejudices, their own beliefs. And really, therapists are the ones that facilitate that.”

“He was committed, unabashedly, to putting these provocative topics on television,” West says, citing “Maude’s Dilemma,” a two-part episode of “Maude” finding Bea Arthur’s Maude Findlay contemplating — and ultimately getting — an abortion. The highly controversial episode aired two months before the 1973 Roe v. Wade decision. And that’s just one of the many, many times Lear’s sitcoms grappled with difficult topics.

“You think of rape and you think of mental health and you think of inflation, you think of alcoholism, you think of domestic violence and poverty. And guess what? All of those are resonating today in 2022,” West says. “That’s why I believe he’s an icon. It’s not because of what he wrote, but because his themes are sustained today. And we have conversations today about the same things that he was writing about in the 1970s.”

Justina Machado, who starred as Penelope Alvarez in the 2017 Netflix reboot of “One Day at a Time,” which Lear executive-produced, calls him “an American hero,” “a true friend” and a “genius.” “Getting to know Norman and working with him is a highlight of my life and my career,” Machado says via email. Brent Miller, the president of production for Lear’s Act III Productions, calls him a “mentor in life and career,” “a friend,” “a partner” and a “daily inspiration.”

Norman Lear is back on TV with ‘One Day at a Time.’ But his influence never left.

Moreno, who turned 90 last year, co-starred in the updated “One Day at a Time.” She and Lear have become close friends; they like to cut up in public appearances, pretending like they are lovers having a spat. It makes her laugh.

“It’s incredible because to some extent, he’s never changed in the most important ways,” she says. “You know, his politics have not changed. If anything, they might have gotten maybe just a touch more radical. But, you know, they were already radical in the first place.”

Is he a genius? “The only reason I haven’t used the word is that I’m sure everybody is using it. It would be nice to be a little bit original,” Moreno says. “His sense of humor is divine.”

Kim Kardashian Has Cooked Up Another Wild New Fashion Trend, But It's A Hard No For Me

Sun Jul 31 , 2022
Without question, Kim Kardashian has been making some rather bold (and slightly freaky) fashion choices of late. She was never exactly boring with choices like her revealing/gravity-defying dress and the head-to-toe leather bodysuits and fetish masks, and now she has cooked up another wild new trend via her SKIMS brand, […] 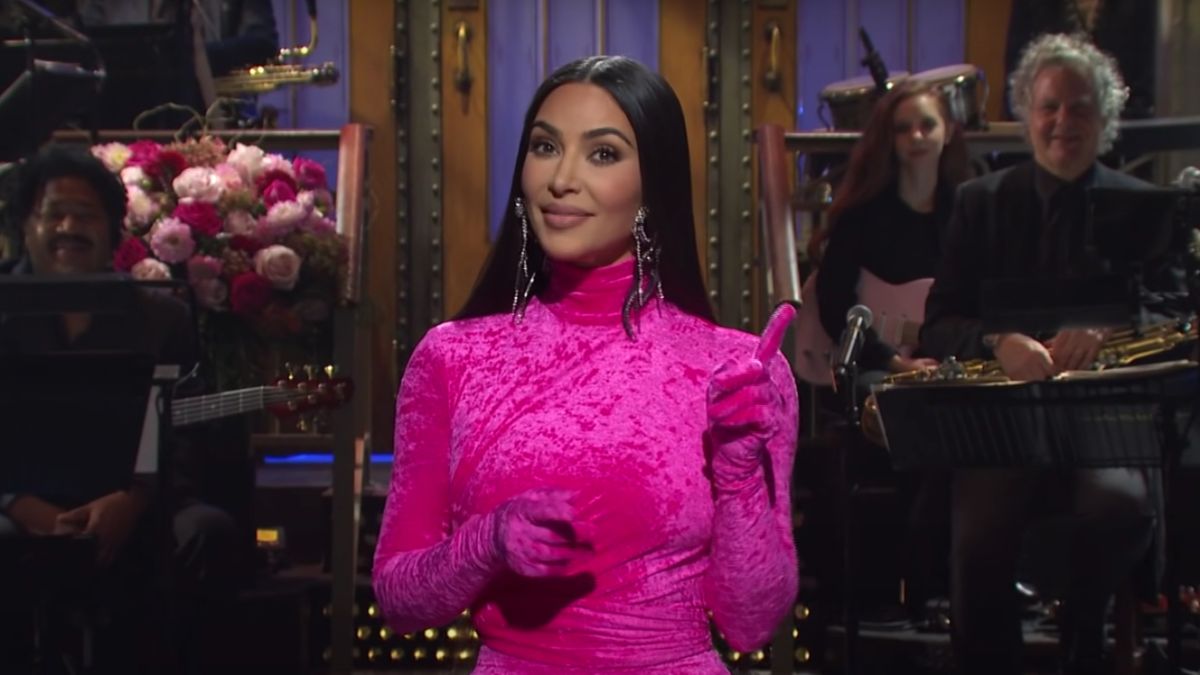