NFTs, or non-fungible tokens, may go down as the latest tech-based acronym that fails to catch on in the music industry long term, or conversely, non-fungibles may end up breaking the mold for artists in a big way. You may have heard the term blockchain thrown around in recent years. […]

NFTs, or non-fungible tokens, may go down as the latest tech-based acronym that fails to catch on in the music industry long term, or conversely, non-fungibles may end up breaking the mold for artists in a big way.

You may have heard the term blockchain thrown around in recent years.

Blockchain refers to a public, linked and decentralized ledger of all digital transactions made with a given digital currency, or cryptocurrency. The blockchain is continuously replicated, updated and reverified among its user base.

Bitcoin and the hordes of other rapidly proliferating weirdly named cryptocurrencies it inspired, from dogecoin to ethereum, are fungible tokens. Each brings its own market-determined value similar to a typical, tangible currency, and each can be sold for typical currency or used to make other purchases.

A non-fungible token, however, refers to a unique unit of ownership information on the blockchain, often acquired in exchange for cryptocurrency.

Matt Medved, co-founder and CEO of NFT Now and founder of Billboard Bands, recently joined up with ASCAP to explain.

“If you asked me to borrow a dollar, and I pulled out my wallet, you probably wouldn’t say, ‘Oh, I want that one,’ “ Medved said. “It wouldn’t really matter which dollar I gave you because they’re all the same. That’s a fungible token. That’s the same with bitcoin or ethereum or a dollar. They’re all kind of the same.

“But a non-fungible token is a unique token on the blockchain. So if I rolled up to an event with a Basquiat painting and (someone else) rolled up with an Andy Warhol, we don’t know just by looking at those what their exchange is. There are all these other factors at play — history, artistry, cultural relevance. NFT is essentially a digital version of that.”

Conceptually, NFTs have introduced the idea of scarcity to purely digital transactions, contrasting with something like the infinitely repeatable downloading of an MP3 for 99 cents.

“(With NFTs) it’s false scarcity in the sense that someone is deciding to create a certain number of images and not allowing those to just be replicated into trillions of versions of it, but it is scarcity,” said Vickie Nauman, founder and CEO of digital music and licensing company Crossborderworks.

“I think that two really strong pieces of the NFT landscape that apply to music is that, in the world of scarcity, music lovers want to collect. We have a long history of collecting.”

Depending on the artist’s prerogative, a scarce NFT, individually verifiable as unique on the blockchain, can take the form of an unreleased demo, a remix, lyrics, a concept art image, digital ticket stubs or a combination, really anything one can imagine owning or collecting.

“The other is access, in that end users want to be part of communities,” Nauman said. “People who love a particular artist feel like they’re in a tribe, they’re in a club. They want access to each other and to the artist. They want to help participate in the creation of art.”

In essence, the appeal of NFTs lies in bringing together the best parts of consumer-artist relations from two different ages of art consumption, combining the meaningful, verifiably unique nature of the physical, scarce transactions of the 20th century with the ease of the 21st century’s digital transactions.

NFTs take the latter idea to a new level.

Much of the potential promise of NFTs among the artistic community comes via the cutting out of digital middlemen.

The advent of Web 2.0 (or the state of the internet as we know it today) brought centralized control of content, which moved monetization away from creators.

For example, the majority of music is now hosted via applications with barriers to entry for consumers and/or artists, such as streaming platforms and social media networks.

Within the concept of Web 3.0 (or the internet to come) NFTs represent the possibility of artists taking steps away from that model, through fostering of more direct communities.

“In theory you don’t need millions of fans to have a successful career as a creative,” Medved said. “The original promise of the internet was that you’d be able to reach 1,000 people around the world who vibe with what you’re doing and want to show up for you.

“They’re (the ones) buying the ticket, taking the ride, getting the merch, showing up for the concert. The issue in Web 2.0 is that all of these centralized platforms kind of got in the way, then all the sudden as a creator, you had to pay to reach even a fraction of your following.”

NFTs offer consumers verifiable value that can come directly from artists themselves, requiring no outside infrastructure to get to the consumer.

“The exciting thing about NFTs is that you’re no longer at the mercy of algorithms or ads,” Medved said. “If you’re an up-and-coming musician and you have 1,000 true fans and you put out an NFT for $100, which is a pretty reasonable price point for an NFT, that’s $100,000 in revenue, which is a lot more than a lot of indie artists see from the streaming services.”

According to Fortune, the top 0.8% of streamed artists on Spotify earn less than $50,000 in revenue annually from those plays. Additionally, under the current industry model, revenues are typically split 50/50, with artists taking home half and the rest divided between industry professionals who help deliver their brand in various ways.

Meanwhile, the NFT market is exploding. According to Forbes, total NFT sales volume came in at $25 billion in 2021, up dramatically from just $95 million in 2020.

Should its potential be realized, NFTs might offer artists a greater than ever return and, maybe one day, a greater sense of control, too.

“Being able to have the freedom to move around in a space that’s so new, it’s extremely liberating,” Grammy-nominated songwriter and producer Poo Bear said. “Just coming from a music industry that’s so controlled, with a marketing team and a radio team, and then you look up and you don’t even have your own fan base or your own data.

“This opens up everything and allows for artists who have kind of felt left out of the industry, they now can have a place.”

And only time will tell if the model continues to catch on.

“We’re all making it up as we go,” Nauman said. “Day to day, the landscape changes and we’re just rolling with it, and we’re all trying to figure it out.”

Is COVID endemic? What experts say Americans should expect this summer

Tue May 10 , 2022
The past two pandemic summers saw a spike in COVID-19 cases, hospitalizations and death, but this season may be different.  Though health experts expect cases to rise, they said the wave won’t be as devastating as the previous two summers or the surge of the omicron variant of the coronavirus.  Unlike the […] 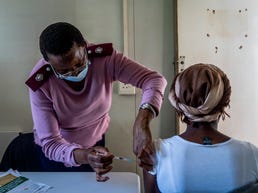